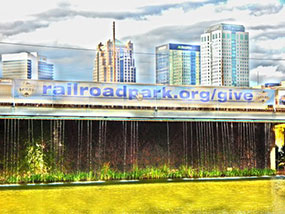 Railroad Park has earned positive national attention for Birmingham from influential publications and organizations that praise everything from the Park's design to its success in stimulating revitalization and transformation in the city.

As importantly, we earn positive attention from local five year olds. One of them told us, "I like the big orange fish in your pond. I named him Sophia, just like my sister."

Every day we hear from many voices about how our 19-acre green space makes Birmingham an even better place to be. Railroad Park Foundation's goal is to make the Park a place for Birmingham to brag about for generations to come.

Railroad Park relies on public and private donations to operate. It takes support from many people, many sources to maintain the Park.

And thank you for bragging on us. We are working to earn that.

You can support Railroad Park through a one-time donation, or to maximize the impact of your gift, you can become a Railroad Park Member.

The 2023 Railroad Park Membership Print is the creation of local artist Ahmad Austin and is available to members at the Park Proud level and above.

Internationally recognized artist Ahmad Austin believes that good art is like good music: it makes you feel something. Marked by bold colors, movement, and loose strokes, his paintings are sure to do just that.
Built upon years of formal training, Austin's personal style emerged when he picked up a palette knife and discovered a new artistic freedom that captured more emotion and energy than he ever experienced while painting with a brush.
Austin's work has been showcased worldwide from Italy to Ireland, as well as respected in his home community of Birmingham, Alabama. When he isn't creating exquisite, award-winning pieces of his own, Austin stays busy teaching others to do the same. By day, he teaches highs school students techniques to express themselves artistically and at night he teaches numerous classes online through his Palette Knife Academy which have been enjoyed nationally and internationally.
Whether he's painting a series of his signature musicians or portraits, Austin's work is a lot like jazz music-filled with a calming sort of energy that keeps people coming back to it. He plans to keep painting and inspiring others to do the same for years to come.